Social Media is NOT MEDIA AT ALL 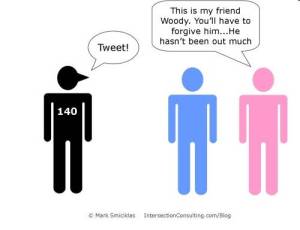 I’m amazed I haven’t really considered this before, but what we all call Social Media is actually the exact opposite of media.

Derivation of the word Media: Latin: medium is the neuter form of the adjective medius, meaning “middle”; as well as, a neuter noun meaning, “the middle”

The singular, medium, early developed the meaning “an intervening agency, means, or instrument” and was first applied to newspapers two centuries ago.

Conversely, “Social Media” is a set of tools for people to communicate between themselves, platforms for interaction and relationships, not content and ads.

They disinterMEDIAte of course!

“Who said this is media? Consumers weren’t trying to generate media. They were trying to talk to somebody. So it just seems a bit arrogant. … We hijack their own conversations, their own thoughts and feelings, and try to monetize it.”
Ted McConnell, General Manager-Interactive Marketing and Innovation at Procter & Gamble Co